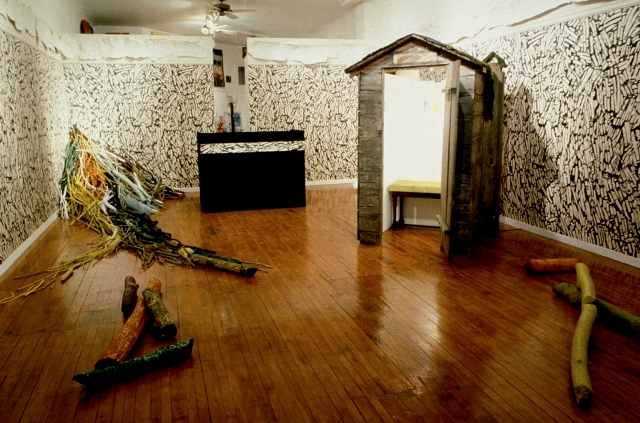 May 2001. Toronto’s Queen Street West is under massive reconstruction. In the middle of the chaos, Paul Walde’s Northern Symphony opens at V. MacDonnell Gallery, featuring legendary performances by Sook Yin Lee, Terence Dick and Combustien Lente. From a small but appreciative audience word spreads about the exhibition, and during the next nine years, it becomes one of the best-known shows that nobody saw.

May 2010. Northern Symphony debuts in Vancouver at Malaspina Printmakers on Granville Island from May 14 – June 23, with an opening reception on May 20 featuring a special performance by the Jordan Mann String Ensemble of Vancouver, who will realize Walde’s original orchestral vision for the score. Additional performances by Vancouver’s the improv trio of Scott Aitken, Frederick Brummer and Jesse Gentes will be also be co-presented on May 21 and May 29, in conjunction with VIVO’s Signal and Noise festival.

Northern Symphony is a multi-component visual art installation that translates the gnawed markings on a tree felled by beavers into cultural forms. These forms include: relief printed wallpaper, a cast architectural frieze, hand-finished gnawed beaver sticks, two dimensional artworks and a digital music score remixed and reconstructed by DJs and experimental musicians. A vintage 1920s outhouse refurbished into a miniature art gallery with a mini-retrospective completes the installation by blurring the lines between inside and outside, the cultural and the natural; the poetic and the literal.